Using a walkie talkie for communication and emergencies is ideal without relying on network connectivity. But can it be traceable once it is lost? If one experienced losing a walkie talkie when going out with friends, maybe it’s time to know that it is possible. Or is it not?

Despite the claim that walkie talkies are challenging to track, it can still be traceable. It might not be as accurate when tracing a GPS device, but it is possible. Tracing happens due to the release of radio waves when the device is on. One can detect the walkie talkie’s location as long as radio triangulation, trilateration, or fox hunting are used.

Tracing a walkie talkie is possible when using the right devices and methods. However, the process can be quite tedious compared to locating a GPS device because weather and terrain conditions can interfere with the signal. For a walkie talkie to be traceable, make sure to switch it on at all times and tune in to the same channel to communicate with friends or family.

How does a Transmitter send Signals to a Receiver?

A walkie talkie can both send and receive information, as long as one person can talk at a time, especially when using the same channel. In other words, it can serve as a transmitter and a receiver at the same time.

When I talk, I press the PTT (push-to-talk) button to convey the message. The other person immediately receives it when listening to the channel. On the other hand, a static sound emits when no one is talking.

The communication is possible through the radio waves, which fall under the electromagnetic field (EMF). When I speak over a walkie-talkie (in this case, considered a transmitter), it produces radio waves that can travel at the speed of light. As a result, the other person (receiver) can receive the message. In technical terms, the radio waves jump from the transmitter to the receiver, recreating the original signal.

So if I am lost, the signal from the walkie talkie can still be traceable as long as I switch it on and tune in to the same channel.

Given this information, if one has already understood how signals work, it’s time to know the different ways to trace a walkie talkie. 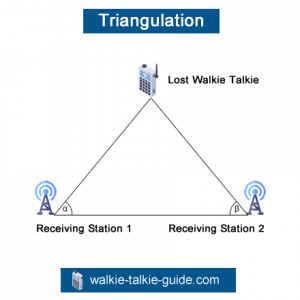 The first way to trace a walkie talkie is through the triangulation method. It is the most common method to track a walkie talkie since people have been using it for years. It measures the direction or radial distance of the received signal from two to three different points to determine a radio transmitter’s location, or in our case, the walkie talkie. The points can be a multiple fixed-position station or a single mobile receiving station.

The advantage of using triangulation is that one only needs to accurately measure the transmitter stations and place the receiving station to its corresponding points. On the other hand, confirm the transmitter’s position to avoid detecting objects such as communication towers, steel buildings, and other obstructions. The receivers can confuse these obstructions as transmitters. 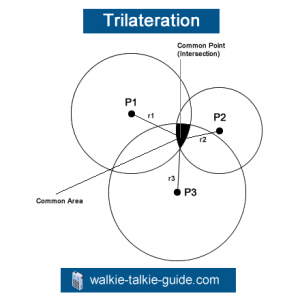 Trilateration also uses the triangulation method by setting up three or more receiving stations to quickly detect the transmitter’s signal. The only difference is, it measures the length of time for the radio signal to reach the stations. Set the stations precisely from the transmitter to get an accurate time.

On the other hand, fox hunting uses a different practice compared to triangulation and trilateration.

Fox hunting, or transmitter hunting, is the most popular way to locate a transmitter. It is an amateur radio direction finding (ARDF) activity set up by radio enthusiasts to find one or more radio transmitters hidden in an area. It is usually held in sports, or any event, which requires only a directional antenna to start.

Once the antenna rotates, the receiver signal strength increases or decreases—making it easy to locate the transmitter.

Use multiple antennae to determine the signal’s direction. One way is to use a single antenna from the receiver and rotate it in space at a high rate, resulting from the Doppler Shift principle. When the antenna gets closer to the transmitter, the received signal strength increases as well.

Another method is to mount two antennae at a specific distance, using the arrival principle’s time difference. Use electronic devices with this method to compare the signal received from the antenna. It also determines if the signal is coming from a direction closer to the antenna or the other. In this way, one can detect the transmitter’s location to whichever antenna it is closest to.

Is Tracing a Walkie Talkie legal?

Yes, as long as the FCC licenses the walkie talkie since channels are authorized and more private. Along with this, it can be easier to trace licensed walkie talkies because interruptions on channels are less likely to happen.

Make sure to read the laws and regulations in your area regarding the use and tracing of these devices.

Conclusion – Can Walkie Talkies be traced?

Follow the methods according to the situation because effective tracing can save everyone from emergencies. Also, tracing is legal, provided the walkie talkie is licensed.