Over the years, Motorola has continuously produced tons of product lines to cater to all kinds of communication needs. From commercial radios to recreational two-ways, you won’t have a shortage of devices to choose from. There is always a walkie-talkie model for every occasion.

In this review, the two models in place are the Motorola T465 and the Motorola T800. The two models are different from one another, and it’s best to weigh your choices if you end up having to choose between the two options. Below is a contrast and comparison of the features and performance of each model. Which one is the best model for your needs and why?

The first thing you need to do upon getting any order package from any model is to set up the product. Since you are getting a brand-new device at hand, you need to initialize the product independently, with your best settings. Often, the setup can take up a lot of time and energy, but not with Motorola devices at hand.

With both the T465 and T800, the setup is the same process. Find the battery pack in the inclusion and then put the battery pack at the latch of the device. If the battery packs are not fully charged and lack power, put them on the charger base first to get a full battery.

With the T465, set the handsets in the channel and enter the interference elimination code before using the device. With the T800, pair the device using Bluetooth connectivity with the Motorola Talkabout App in a smartphone. Initialize the settings of the T800 handsets using the App.

Overall, both models are straightforward to set up and initialize, even for users who don’t have expertise in communication devices. Set up won’t take the entire day before you can try and test the handsets of both models.

Waterproof capabilities may be helpful to many walkie-talkie users. As a portable device user, you would want to have a durable product under all conditions and environments.

The T465 is not entirely waterproof and has an IP rating of IP54. Despite dust intrusion and some water splashes, the device still works. However, it won’t work well with prolonged water submersion.

The T800 has an IP rating of IPX4. The device can withstand jets of water from any direction and angle. And however, water submersion may destroy the device over time.

Both models are weatherproof, and the daily weather conditions won’t damage the product. The devices from both models can also withstand heavy use and have a durable design that is compact for demanding outdoor environments.

View the Motorola T800 on Amazon*

The power source is significant, especially if you are going to use devices for more extended periods. No matter where you are, it’s best to have a charger or an extra battery pack with you to power the T465 or T800.

For the T465, the basic package inclusions include a NiMH battery that lasts up to 10 hours of use. For a spare power source, 3 AA batteries can power the device for an additional 26 hours.

For the T800, the primary inclusions have a 1300 mAh NiMH battery that lasts up to 14 hours. 3 AA batteries can add up to 25 hours of additional use time for the device.

For recharging, both models include a charger that you can use. Plugin the adaptor and connect the devices to the proper ports.

The maximum range of any walkie-talkie device may differ from the actual distance range of the units. The surroundings and environment significantly impact these wireless devices’ signal reception and communication features.

Both the T465 and the T800 models have a maximum distance range in the following:

There is no specific information about the power outputs of both models during use. 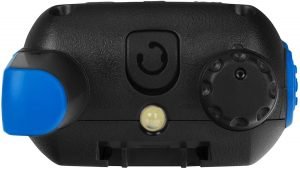 View the Motorola T800 on Amazon*

The T465 and T800 both share the same frequency band and ranges in the spectrum. These models have a range of 462 to 467 MHz in the Ultra High-Frequency band. The band totals 22 channels with 121 privacy codes for each channel.

The FRS and GMRS options are also present in both models. Using the FRS band is free in the United States of America, and for the GMRS band, you’ll need an FCC License to use the channels.

The features of the T465 and T800 are not very far apart. As they come from the recreational radio lines of Motorola, these models are intended for activity use rather than commercial use. Relevant features make these models strong depending on where you will use the device.

Additional features for T465 only:

Additional features for T800 only:

Price is one of the most significant factors in purchasing a portable communication device. These devices in any model won’t come in affordable, especially if you buy in bulk. It’s best to rate against the price performance of both models to know which one you should buy.

On average, the T465 costs $90, and the T800 costs $109. Both packages include two-pack handsets and the primary inclusions for both device models.

Both models fall under recreational radio devices that work outdoors. The features of the T465 and T800 only have a significant difference with the Bluetooth connectivity ability of the T800. The T800 can connect to your phone as an additional access device for a slight price difference when you’re outdoors.

Both the T465 and T800 are recreational radios that are best for outdoor use. There are many devices in the market that give the same function to users. The price difference of both devices is not far apart, so the decision may become more challenging for the best device for your purchase.

Suppose you want to go out and have a dependable device that doesn’t waste power and gets the job done. The “silence” of the T465 makes it a good choice for hunting trips or fishing activities that may need silence at certain points without sacrificing communication.

If you want to double use your smartphone as another device to power your trip, the T800 gives this feature to you. The integration of smartphones and T800 may be relevant areas that have poor reception.

Overall, you should buy a radio device that suits your needs. There isn’t a one-size-fits-all for all walkie-talkie users.