Contents show
1 Historical Use of Walkie-Talkies in the Military
2 Current Military Walkie-Talkies
3 Reasons why Walkie-talkies are relevant in Military now more than ever
4 Other Military Communication Devices
5 Over and out – What Walkie Talkies does the Military use?

Historical Use of Walkie-Talkies in the Military

Walkie-talkies were first invented by a Canadian citizen named Donald (Don) Higgs in 1937. He created this mobile wireless device while working for CM&S to help pilots effectively communicate. Alfred (Al) Gross, a Canadian-American citizen, invented his version of the same technology between 1938 to194. Gross went ahead and invented pager and wireless phones.

Don Higgs further modified the walkie-talkies were to cater to various emerging needs. For instance, the C-58 model had voice scramblers to through off the enemy, improved security, multiple antennas for a better range coverage, additional power supplies for lasting performance, filters to remove background battle noises, and clear communication. This model was widely used by the military from 1942 and was a result of secret R&D that started back in 1940. The C-58 model was called a handy-talkie.

“[O]nly the bounds of human imagination will place a limit on the usefulness of the ‘walkie-talkie.’ Its value will prove incalculable in reaching physicians while en route in automobiles to patients’ homes, in providing contact for hunters with a central lodge, in directing delivery trucks while they are in transit. All these services and many more are assuredly going to make life both more efficient, enjoyable and in many instances downright fun.” — New York Times writer Jack Gould.

From AN/PRC-6 to the US Marine Corps wanting to develop a squad radio, walkie-talkies, and wireless technology has gone through drastic advancements since the Don Higgs’ C-58 Model. Military communications itself has advanced since World War 2. They want better and lighter electronic devices. So, we are going to explore military communication devices at length in this article. But first, let’s see which walkie-talkies are used by the military in the 21st Century.

Special Forces are using Falcon III AN/PRC-152 multiband handheld radios and are still relying on designers to reduce the load of batteries, wires, and devices. They also use a range of devices which are collectively called 117 Foxtrot. The 117 Foxtrot includes Harris Falcon II products like PRC-150 and the AN/PRC-117F.

PNR-500, a digital squad radio, is quite popular among smaller military units. These are quite useful in demanding situations like the ones happening on combat ships or during urban warfare. The Personal Net Radio (PNR-500) operates in the frequency range of 400 to 450 MHz and has 15 channels. This walkie-talkie can be categorized as UHF radio, and they are usually tailor-made for smaller special force units.

There are other popular two-way digital radios used in the military by Motorola, Hytera, ICOM.

are the most popular walkie-talkies among the military. Motorola RDU4160d is the most powerful one, with 4 watts of power and 16 channels from the three.

Motorola RMU2040 is considered the most economical military radio, and Motorola RDU4100 is the most durable one.

If you were wondering what parameters are considered while choosing walkie-talkies for the military, here is a quick round-up of the same.

Many people still wonder why to use walkie-talkies for military communication when wireless technology has improved drastically, and a range of quite advanced devices are available in the market. 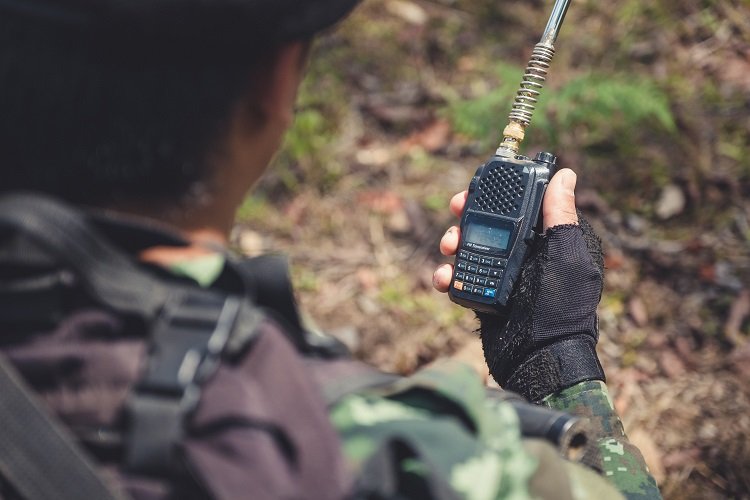 Walkie-talkies are great communication devices and are still widely used, apart from the military, in the capacity of hospitals, events, shopping malls, and more.

When communication technology was not this advance, the military used to rely on the likes of drums, flags, riders, horns, letters, and whatnot. At one point, the military had a specialized group for signaling called Signal Corps, where the jobs were highly technical and required quick reflexes, thinking, and execution.

At one point of the other, the military has used the following communication equipment, techniques, and tactics:

The entire undertaking of military communication (MICOM) can be divided into six categories:

Radio is one of the five main methods of communication in the military. The other four being sounds, visuals, messengers, and wires.

Over and out – What Walkie Talkies does the Military use?

When lives are on the line, communicating quickly and effectively becomes the most important. Losing any military personnel because of lack of equipment, faulty equipment, or low battery charge is just unacceptable. The devices or electronics used for military communication need to be reliable, serve our troops in harsh conditions, and have a quality built.

The effective functioning of the military depends on the communication network, quite literally. The walkie-talkies and radio equipment have served the military since the beginning of the revolution in wireless technology, and their saga is a never-ending one. Well, until the next advancement in encryption communication.

1 thought on “What Walkie Talkies does the Military use?”