Low-powered devices like hand-held “two-way” wireless radios, such as walkie-talkies, are used to send and receive messages over short distances.

These devices produce an electric field, also known as electromagnetic radiation or EMF, which is thought to be extremely hazardous to one’s health.

But the National Research Council or NRC has been looking into the relation between EMF from devices like walkie-talkies and cancer but has yet to come up with any definitive findings. Despite this, numerous experiments are still being carried out.

The electromagnetic radiation from walkie-talkies consists of non-ionizing radiation that is commonly thought to be safe for humans to be exposed to regularly.

Non-ionizing radiation is not a cause of breast cancer, according to scientific opinion, and it has not been found to do any damage to humans at or below the FCC’s radio frequency emission thresholds.

Radiofrequency (RF) radiation is used by walkie-talkies and mobile devices to connect. When RF radiation is strong enough, it has a ‘thermal’ effect, meaning it increases body temperature.

Walkie-talkies or any other gadget that uses radio waves have not been clinically shown to cause cancer Cell phones, Wi-Fi, and other electronics emit electromagnetic fields (also known as electromagnetic radiation) or EMF, which are considered to be very dangerous.

The radiofrequency radiation used by walkie-talkies is the same as that used by most cellular telecommunication systems and appliances, such as smartphones. There has been no proof that any of the paths in the electromagnetic field cause cancer.

An extensive international study, on the other hand, has found no definitive or compelling evidence that walkie-talkies are harmful to one’s health in the short or long term uses.

As science and technology have advanced, numerous technological technologies have been invented and used; we have been constantly exposed to artificial electromagnetic waves in our everyday lives.

The widespread use of numerous hi-tech technologies in industrial culture has undoubtedly increased the chances of being exposed to electromagnetic waves. Wireless networking devices, such as walkie-talkies, workstations, and mobile phones, have evolved into a necessity for today’s society.

These radios will generally not be known to cause dangerous exposures to consumers due to the comparatively low power levels used and usually use a few watts; in particular, the intermittency of transmissions has a low load effect.

Although it has not been able to ascertain whether a risk factor occurs with low levels of exposure, many experts agree that small amounts of radiation can increase cancer risk and that the degree of risk is directly proportional to the dose level.

Despite the health risk, most radiation exposure forms have not been shown to cause adverse health effects, such as breast cancer.

Exposure of humans to RF radiation may cause problems in several environments, including the office. Many jobs need frequent or irregular exposure to RF radiation from stationary or hand-held communication devices.

A few studies have directly attempted to quantify cancer risk in response to assessed or assumed levels of exposure.

When RF radiation is absorbed in large enough quantities by the body, heat is produced. This will result in burns and injury to body tissue.

While RF radiation is not believed to cause cancer by disrupting DNA in cells in the same way as ionizing radiation does, there has been a fear that in some cases, non-ionizing radiation could have other effects on cells that may lead to cancer.

What biological Consequences can RF Energy have?

The proof for adverse biological consequences remains unclear and unproven at comparatively low RF radiation exposure levels, that is, levels less than those that would cause substantial heating.

No thermal effects have been originally used to describe those phenomena. More research is required to assess the consequences and their potential importance to people’s wellbeing, if any exists.

However, tests have found that the amounts of RF energy in the atmosphere that the general population is subjected to are usually far below the levels needed to achieve substantial heating and elevated body temperature.

Even so, there may be circumstances where the prescribed thresholds for healthy human exposure to RF energy are surpassed, especially in occupational environments near high-powered RF sources. Restrictive steps or acts can be required in such situations to ensure the safe use of RF energy.

Is it Possible for Radiofrequency Radiations to cause Cancer?

The probability of similarity between RF and microwave exposure and cancer has also been explored in some tests. So far, the results have been inconclusive.

Although some research programs have indicated effects in relation and tumor development in the following exposure under certain conditions, the findings have yet to be independently replicated.

Observational trials, which are meticulously organized and conducted, will provide scientific data on cancer spread in the population. Studies investigating a possible link between RF transmitters and cancer have been reported over the last 15 years.

Few experiments have looked at the long-term impact of RF fields from base stations on people’s wellbeing. This is due to the difficulties in identifying potential health risks from the shallow signals generated by wireless devices from other RF signals in the area of higher intensity. The majority of research has concentrated on cell phone users’ RF exposures.

In reality, other studies have shown no proof of a link between cancer and any other disease. To better answer this issue, further testing is being conducted in many laboratories.

Related of Exposure to Radiations

Radiation is a variation of electromagnetic wave radiation that passes at the rate of acceleration across space.

Radiation is divided into two categories:

Ionizing radiation (IR) is a form of radiation that may cause changes in atoms or molecules in the body, leading to tissue damage such as cancer. X-rays and gamma rays are examples of infrared radiation.

Non-ionizing radiation (NIR) – does not affect these modifications but does cause molecules to vibrate. This will result in temperature fluctuations as well as other results. UV emission in the sun, visible light, light bulbs, infrared radiation, and microwave energy are also examples of NIR. 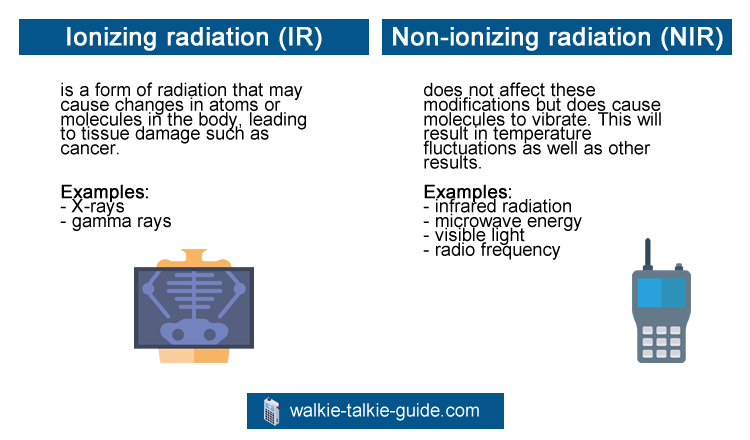 The walkie-talkie system comprises the actual handset and base stations. To achieve the greatest coverage, base station antennas are mounted high off the ground. A radio receiver and a transmitter are also used.

As you make a call, the handset connects with a local base station by emitting radiofrequency (RF) radiation through its antenna. Your call is routed into the landline phone grid until the base station receives the signal.

Conclusion – Can Walkie-Talkies give Breast Cancer?

In conclusion, human experiments are still yet to find a direct connection between walkie-talkie use and tumor growth. However, these findings have some flaws that make it impossible to settle whether or not using a walkie-talkie increases the threat of cancer.

Radiofrequency radiation may not have enough energy to affect DNA directly. As a result, it’s unclear whether or not RF radiation will cause cancer. While several researchers have confirmed potential elevated rates of some forms of tumors in animal studies exposed to RF radiation, these studies’ findings have not yet given definitive answers.

No significant rise in cancer risk is being observed in studies of individuals who might be exposed to Radiation exposure at work, such as those who work near or with RF devices, those who service communication antennas, and radio operators.

Various research projects have investigated if there has been any harm to consumers of hand-held wireless technologies like walkie-talkies due to recent news, uncertainty, and confusion about claims of potential health consequences related to RF exposure from hand-held electronic devices like walkie-talkies.

Up to this present time, there is no scientific proof linking walkie-talkie use to cancer or several other health problems.

This study was conducted to address further whether or not exposure to RF fields can systematically and accurately impact cancer risk.

However, after reviewing the data and comparing the studies, an unquestionable solution to the issue is still inaccessible.