The Motorola T465 walkie talkie is bought in two or four units, depending on the Amazon seller. The seller’s setup package for the T465 includes belt clips for each handset. The model comes with: 2 radios, 2 NiMH rechargeable batteries, 2 Micro-USB wall charging cables, two belt clips.

Other than that, there’s the standard user guide, accessory brochure, and warranty card.

The setup for the T465 is easy. Install the batteries and handset. Then, you will have to configure the handsets to the channel and set the interference elimination code. As far as other models, the T645 handsets are user-friendly. It is fast and easy to assemble.

However, what differs this model from the T465 is that the rechargeable batteries need to be recharged. After it is fully charged, the batteries can be installed in the handsets. Once the handsets are ready, you can now set them to the channel and enter the interference elimination code.

The user manual for the T480 provides a list of channels and frequencies that state if the channel is FRS or GMRS. Then, you can test the handsets. The setup for the T480 takes time.

View the Motorola T480 on Amazon*

The IPR stands for Ingress Protection Rating and International Protection Marking. These markings are a code that a manufacturer places on their products. The IPR is established to specify how the product can withstand solid-state and liquid-state particles. This numeric rating dictates the probability of a product being able to withstand harsh weather.

This is the case for walkie talkies that are often used in desolate places and emergency circumstances.

The last digit is 4, which means that the T465 can withstand water splashes from any angles. It means that this model is weatherproof. It can work in harsh weather such as hailstorms and snow.

The Motorola T480 also has an IP54 rating. This model can be used in harsh weather conditions such as storms. It is also protected from water from all angles.

The T465 presents two power options for its users. One is its rechargeable batteries, the NiMH ones, which last 10 hours. The NiMH is charged with a micro USB battery charging adapter.

The Motorola T480 is similar to the T465 in this aspect. That is because the T480 also has two power options. The package comes with NiMH batties, which again lasts up to 10 hours. The model comes with a micro USB battery charging adapter.

The Motorola T465 can reach up to 35 miles. That is within good weather conditions with less to no obstructions.

According to Motorola and the Amazon product description, the Motorola T480 can also reach up to 35 miles. However, like the T465, it needs to be in ideal conditions.

What sets the T480 apart is it was built as a part of an emergency preparedness kit. This means that despite harsh weather conditions, snowstorms, and T480 can still survive and work efficiently. It is expected that the range is less than the described range as the weather affects the function greatly. One review boasts that the T480’s range can reach up to 6 miles in open water. 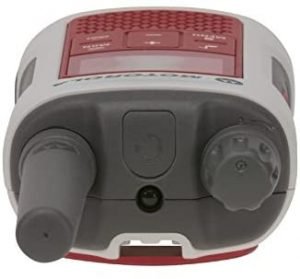 View the Motorola T480 on Amazon*

The Motorola T465 differs from the T480 greatly when it comes to frequency. As per Motorola walkie talkies’ standard, the T465 operates under the Family Radio Service (FRS) and General Mobile Radio Service (GMRS) frequency ranges. It ranges from 463 to 467 MHz.

It covers 22 channels, which all have Privacy Codes that total to 121.

As with other Motorola walkie-talkies, the T480 also operates on 22 channels with 121 privacy codes.

However, unlike the T465, you will need a license to use Channels 1 to 7 and 15 to 22. You can obtain the license under the FCC. These channels operate under theGeneral Mobile Radio Service (GMRS) system; that is why you will need to obtain a license.  Channels 8 to 14 are license-free.

The Motorola T465 has an Emergency Alert Button that allows the user to send out distress signals when in danger. This model also has a QT mode, which stands for “Quiet Talk.” The QT feature allows the T465 to communicate with other compatible Motorola products while it filters interruptions.

The T465 has a built-in flashlight with an emergency LED light source.

An important feature of these walkie talkies is the NOAA Weather Radio. The weather radio updates users on weather reports and gives out emergency alerts in upcoming weather disasters and events.

The iVOX/VOX feature allows hands-free operation, even without the accessories. The VibraCall notifies users of an incoming call through vibrates instead of loud ringers. This will come in handy with rescue operations.

The PTT or Push-to-Talk Power Boost extends the range of transmissions of calls. The PTT is activated when users increase power output. Also, there are a total of 20 call tones.

The T465 is praised for its eco-smart design, meeting the CEC standards for low energy consumption.

However, what sets the T480 apart is that the package comes with a preparedness checklist and whistle. You also have access to 11 NOAA weather channels.

The T480 comes with a Quite Charge feature. When this feature is turned on, you will not receive regular calls. You will still receive alerts.

You can listen to FM-radio as the T480 comes with a built-in FM radio.

The price for the Motorola T465 will be higher if you only want one unit. That is because it comes in pairs and bundles, which is by two or four. For its price, it is packed with features.

The Motorola T480 is priced a bit higher than the T465. You can only buy one unit. The T480 comes with a series of packaging contents that cannot be found in the T465. It has an emergency preparedness checklist, a whistle belt clip, and more.

The Motorola T465 and Motorola T480 are good models. As expected of Motorola, they have not skimped out on features with these walkie talkies.

These units have similar ratings, such as an IP54 rating that proves it is weatherproof. However, while it has excellent features, choosing always depends on the activity you will often use.

For people who love the great outdoors, the T465 is enough. That is because this model meets all the requirements of a standard walkie talkie. The T465 can be used for emergencies, as it has the basics such as NOAA weather channels and privacy codes. But for activities such as camping, hiking, this walkie talkie is great.

The T465 is also a solid choice for emergencies, such as storms. As long as there are not that many obstructions, the T465 will work well.

The T480 is a solid choice for extreme activities and those living in desolate areas. That is because the T480 was made for emergencies, being a direct answer for red cross emergencies. People who live in flood-prone areas will benefit greatly from its strong shell and solid IP54 rating. Not only that, but the range of the T480 is strong even in cases where there is a lot of obstruction, which is good in case a disaster takes place. For extreme activities such as ice climbing and skiing, the T480 will communicate well. The emergency preparedness kit of the T480 also works well, making this model ideal for people in high-risk areas.

The Motorola T465 and Motorola T480 are both solid choices for walkie talkies. You have to match your needs with the specs to enjoy its benefits truly.