Before, I thought of why people purchase walkie-talkies. Technology bloomed already, yet many still fantasize about that device. During emergencies, mobile phones might not work. Unlike two-way radios, reaching out is not a problem. Walkie-talkies can cross barriers and works whatever the weather is. Mobile cellphones cannot do that. Usually, lines are off during these times. Technically, having a walkie-talkie is a gem.

Everything is literally inside the Motorola T400’s box. Including the manual, charger, free batteries, and the two radios. There were no such complications in assembling because the manual got your back. It is a five-finger exercise for me, which means connecting channels and other stuff I need is already there. Since I was looking for a simple device, I can say that Motorola T400 is a wise choice.

View the Motorola T402 on Amazon*

In terms of waterproofness, both devices have an IP54 Waterproof Rating. They can bear up with any weather, rain, or shine. Although it is not water-resistant at all, with its waterproof rating, I can tell that Motorola T400 and Motorola T402 are safe from any solid-state particles, as well as liquid particles. But for safety purposes, the inside part of the devices should be extra protected.

Either the Motorola T400 and the Motorola T402 uses a rechargeable NiMH battery. Like what I have mentioned earlier, 3AA (alkaline) batteries can also do. I must say, both devices are eco-friendly. And if electricity off occurs, they can be up all night long.

The Motorola T400 has this nice feature that reminds me of when its battery is already low. Plus, as per Motorola, I can save half energy by turning on the idle mode. If I use a NiMH battery, the device could rack up to 8.5 hours. While using the 3 AA batteries, the battery life is 21 hours.

NiMH battery works longer on Motorola T402. It lasts up to 10 hours straight. If not continuously used, the device’s battery could extend up to several days. Take note, for 3AA battery only. But no worries, the 21-hour battery life is ensured. For charging, a USB cable may perform.

Since I love the outdoor, it is necessary to find a device that fits me. Whether in the rural or city areas, performance is a must. The signal between me and the one I am communicating with is a priority.

According to the manufacturer, the Motorola T402 and the Motorola T400 have a range of 35 miles. For me, this is important. The Motorola T400’s scope is six miles on open water. I consider this as average, comparing to other high-end walkie-talkies. 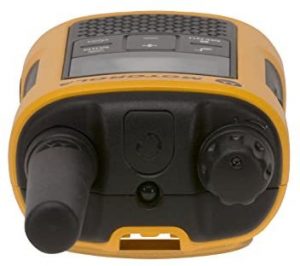 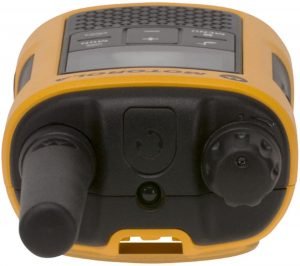 View the Motorola T402 on Amazon*

FRS (Family Radio Service) and GMRS (General Mobile Radio Service) are present in both walkie-talkies. An additional benefit, both of them have an alert feature whenever a local emergency happens. For instance, an evacuation needs to happen. I will get notif right away.

There are 22 different channels connected to the Motorola T400. It has 121 privacy codes that exceed 2662. That means an open channel network is easy to find. If I can’t find a free frequency, I can still run a channel.

The Motorola T402 has 22 different channels too. But besides, it can provide contemporaneous updates about weather conditions. Honestly, I am amazed by that. The product instruction also indicates that FCC licensing is a must.

I will emphasize each feature the devices have. First, the Motorola T400 can communicate with any radio with the RS / GMRS feature, no matter what the brand name is. It has VOX functions that have a speakerphone in it. Also, I can set my call tone. I can choose which I will be familiar with and the unique one. The Motorola T400 can filter noise, especially in crowded places. So, If I am going to use it outside, there is no hassle.

The Motorola T400 is weatherproof. It is not brittle nor too hard. The grips are also rubberized, which makes them easier to use. This walkie-talkie has a push-to-talk button. I can adjust the volume anytime. Since I am a bit clumsy, this device suits me. If I drop it soon accidentally, I know it will not break. The exterior is compact and easy to hold. As a bonus, the Motorola T400 Alkaline battery is its best accessory. It weighs 0.43 lb. Sizing 7.54 x 2.26 x 1.37 inches.

On the other hand, the Motorola T402 has a built-in flashlight. Plus, the device’s color is yellow. I must say that it is great at night too. Especially in emergencies, this walkie-talkie is a big help. It is perfect for outdoor activities like hiking. As I have discussed earlier, the battery can last up to days (occasional use only). The Motorola T402 has a sleeky design and also, it is portable. As for me, this device matches me well. It also weighs 0.43 lb. Its size is 7.54 x 2.26 x 1.37 inches.

Considering the features, range, setup, I must say that they are identical. Both the Motorola T400 and T402 come with a box and manual. They are also waterproof with an IP54 waterproof rating. They can both resist any weather. Both of them also have a range of 35 miles. There are 22 channels also present in both walkie-walkie. They can also provide real-time updates. Their size and weight are also similar.

But I look closely at other qualities.

In choosing a walkie-talkie, I also consider the price aside from quality. I make sure that the price is worth it.

The Motorola T400 price ranges from $60-$70. But on Amazon, the price starts at $162. This device is a bit expensive than other Motorola walkie-talkie units. Motorola T400 is always out of stock from Amazon. That makes it a high-rating walkie-talkie among other walkie-talkies. Despite its price, I must say that the overall performance and the quality of the walkie-talkie itself are worth it.

Some of their features are similar to each other. So, the price is a factor in choosing the best walkie-talkie to buy.

I prefer the Motorola T402 more. I think people buy this because of its overwhelming price. Some might think high price means good quality, well, yes, but in comparison to T402, I can have a low-cost yet good-performing walkie-talkie.