There are many outstanding walkie-talkies available on the market these days. But if you want to narrow down your choices, two of the most reliable options are Motorola T503 and Motorola T600. Both devices have excellent specs and features that you would want to consider. But which one is the best between the two? To help you make a sound decision, I have created this article to compare Motorola T503 and T600.

Let’s begin with Motorola T503. I can tell you that the setup of this device is straightforward. You only need to install the batteries in the compartment found at the back of the portable radio, then press MODE for a few seconds to activate it. Do the same thing when turning it off. Once the battery doesn’t have enough power, recharge it by plugging in the cable to the charging port. Make sure that the device is turned off before charging it. To make it fully functional, adjust the channels, sound volume, and other user settings while the radio is active. Motorola T503 comes with a user manual, so make sure that you read it thoroughly.

When it comes to Motorola T600, the setup is also relatively easy, but it can take a while for you to familiarize the setting adjustments. This unit uses three AA alkaline batteries, and you need to install them in the battery compartment found at the back of the device. Once the batteries are installed, press the MODE button and hold it for a few seconds to activate (or turn off) the device. Meanwhile, the settings aren’t that, and there aren’t too many options on the menu. But as I have said earlier, it can take some time to get used to the interface. It’s the reason why you need to read the user manual before taking it outdoors.

If you are interested in doing water adventures, you’ll be happy to know that both models are waterproof. This feature is one of the reasons why these devices are better than the other walkie-talkie models.

Motorola T503 is perfect for the outdoors, and you can take it whenever you do water-related activities. It’s built well to protect itself from getting water damages. And if you accidentally drop it into the water, don’t worry because you can get it back. T503 floats, so you don’t have to dive into the water to get it back. This portable radio is also functional during extreme weather conditions like heavy rains and typhoons.

Motorola T600, on the other hand, has a waterproof rating of IP67. It means that you can use it underwater for a maximum of 30 minutes without having to worry about irreparable damages. The device’s waterproof abilities are brought by its thick plastic-covered body and waterproof buttons.

Both models use batteries as their power source, but they differ in some ways. The T503 uses six AA batteries, and they are included in the package. They are rechargeable but can only last for 10 hours. You can replace them with Alkaline batteries that can last up to 29 hours. The rechargeable batteries can be fully loaded within eight hours, but you have to make sure that you plug it out when the radio is fully recharged. If you connect it to the charger for too long, its battery life can decrease fast.

The T600 has a much better power source than the T503 since it features two battery capabilities. You can use the two free NiMH rechargeable batteries or replace them with three disposable AA Alkaline batteries.

The former only has a 9-hour battery life, and you need to recharge them for eight hours. Now, recharge the device is an advantage because you don’t have to buy new batteries now and then. However, one downside is that the usage time is almost the same as the recharging time, which is time-consuming.

Meanwhile, the latter has a battery life of 23 hours, and it’s advantageous if you’re in a place where you have no access to electricity. Just make sure that you have extra batteries with you. I like that the device has a low-battery feature, which alerts you when the batteries are almost out of power.

Let’s talk about the ranges of the devices. In a nutshell, there isn’t so much difference between the two models. In normal weather conditions and without too many interferences, the T503 has a communication range of 35 miles. But the range isn’t fixed, and it can change depending on the location and physical factors that can interfere with the signal.

The T600 has a 36-mile range, which is nearly the same as T503. But the maximum capacity only works without distractions. You should be happy if it can cover six to seven miles in an open area with many physical factors. 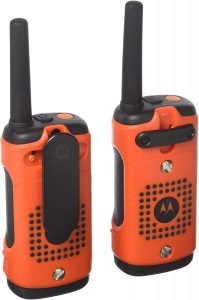 View the Motorola T503 on Amazon*

The frequency band of Motorola T503 ranges from 162.000MHz to 162.550MHz for NOAA or Emergency Frequency or 462 MHz to 467 MHz for FRS or GMRS. In its system, it has 22 channels and around 121 privacy codes. It can connect with other FRS or GMRS devices regardless of the device’s model or brand. Unfortunately, you have to get an FCC license if you plan to use the GMRS frequencies.

Similar to T503, Motorola T600 operates on FRS and GMRS frequencies and is built-in with 22 channels. It has a frequency range of 462-467MHz, which is also the same as the other model. If you’re only using the FRS frequencies, there is no need to acquire an FCC license. But it’s a different story if you intercept GMRS frequencies, which requires a license to access them.

So far, it seems like there isn’t much of a difference between the two models. But I think this is where the tiebreaker begins. The Motorola T503 has a real-time weather update and 11 weather channels, which include seven NOAA frequencies. It features a built-in emergency alert that produces a loud sound (then a 20-second transmission follows) when it’s activated. It is also built with a keypad lock, a backlit display, and 20 different call tones, including a low-battery alert and a beep for the talk confirmation.

One of the best features of the T503 is the VOX function, which allows you hands-free usage of the portable radio. You may need to use the auxiliary headsets so that you can hear the sounds from the device. If you want an environment-friendly gadget, then this one is for you. It takes pride in its Eco-smart design, which makes it efficient in conserving energy. It doesn’t consume so much power when it’s in idle mode, so you don’t have to worry about using up the batteries.

While the features of T503 are quite impressive, Motorola T600 apparently has more to offer than the former. With the exemption of the Eco-smart design, it has all the features of T503. In addition to those features, the T600 has a better water-resistant level and the capability to float if you accidentally drop it into the water. Simultaneously, it automatically activates the flashlight, making it more convenient for you to find it in the dark.

Of course, the VOX function is available in the T600. It features the Auto Squelch that can reduce the interference, giving you a clear reception. To ensure that there are no other distractions while transmitting your messages to the other party, this model has a nuisance delete option. There is no reason why you can’t hear the other person on the other line.

Another deal-breaker in this comparison article is the price. There is a significant difference in the two models’ prices, and the devices’ specs and features bring that. The current costs of Motorola T503 and T600 on Amazon are $59.55 and $82.50, respectively. But they probably cost higher in other online markets, so make sure to check and compare the prices first before making the purchase.

But going back to the justification of the prices, yes, the T503 is cheaper than the T600, but it is more expensive than other Motorola models. It just goes to say that it is of higher quality and is a worthy model to be considered. But the T600 has a higher price because it does have better features than the T503. I can’t take away the fact that it can float and automatically triggers the flashlight during emergencies. That’s a huge plus for me.

So, we have finally reached the final part of the article we need to answer: which of the two walkie-talkies should you buy? Before answering that, I’d like to point out that Motorola T503 and T600 are similar in many ways.

They have the same setup process, and they are both waterproof devices. Their power sources are also the same, as well as the range and frequencies. Furthermore, they both require an FCC license if you’re going to use the GMRS frequencies. However, you’ll have to look at the features to see the difference and help you decide which one to buy.

But if I were to choose between the two, I would go for the Motorola T600 since it has more impressive features than the T503. The price may be higher, but you get your money’s worth because it performs better. But if you think about it, it’s relatively cheap for a high-end walkie-talkie. You’d probably come across the same quality of portable radio, but it’s too expensive and may not even be worth it.