If you are familiar with walkie talkies, you will know that Motorola is a company that is considered reliable in the field of communication and a great manufacturer of reliable two-way radio used by individuals and organizations alike.

There is not much difference between these two models as they both belong to the Talkabout series. Both their set-up and basic functions work the same. If anything, you can consider the Motorola T631 as an upgrade to the T600 as it was released later than the Motorola T600.

The battery can be accessed by removing the cover found at the back of the walkie talkie. After ensuring that the batteries are safely placed inside the device, you can start things up by pressing the Power button. Doing this will briefly show the feature icons on the monitor — then it will display the latest and current channel it is tuned to.

Communicating is fairly easy and convenient as well. To transmit over the radio messages, you have to make sure that all the radios in your group are tuned to the same channel and privacy code. Then, press and hold the PTT button to start transmitting. Once done talking, let go of the PTT button to receive a transmission from other radios.

Although both devices’ basic functions are pretty easy to learn and understand, using the other feature, it has to offer can be a bit tricky. To learn more and become proficient in this aspect, make sure to read the User Guide that comes along with the device.

Like the Motorola T600, the latter model T631 also has an IP67 water-resistant rating making it resistant to water. This means that both devices can be submerged underwater for as long as 30 minutes within a 1-meter distance from the surface of the water.

Most devices that are commonly found in the market are only splashproof. Water-resistance certainly gives it an edge against the competition. However, against each other? Nothing much you can find here. Both devices are equally reliable in terms of water resistance as they both have the same water rating. They can handle themselves well even when submerged underwater as long as it is within the rating specifications.

The Motorola T600 and the Motorola T631 both come with a NiMH rechargeable out of the box. This can give the device up to 9 hours of battery life. This is good enough to last you a day, even longer if you don’t use the device much.

This is most convenient, especially if you have easy access to an outlet or any electric source (e.g., power banks). They both use a micro USB charging cable, which is pretty easy to find if your cable becomes damaged, as a lot of Android smartphones are still using it up to date.

On the off chance that you do not have access to a charging outlet, the Motorola T600 and the Motorola T631 also support the use of AA batteries. You can switch out the rechargeable batteries for three AA batteries, which can last you for approximately 23 hours before it runs out of juice. This option is handy for those doing outdoor activities yet have no means of recharging the device. 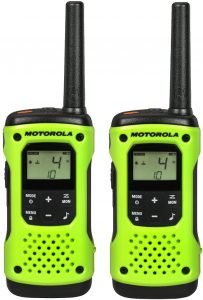 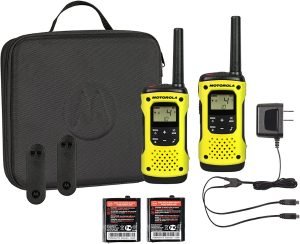 View the Motorola T631 on Amazon*

This is where the two models are slightly different. The Motorola T600 is expected to have a range of 36 miles under good conditions. Good conditions refer to being used in a location where there are little to zero obstructions present, has good weather, etc. Though this may be the case, if you read my previous review on this model, I have observed that this is not always the case.

On hilly terrain, I was able to get myself a range of about 6 miles, which I think is good enough for its price and standards. Most walkie talkies in the market might even give you a lesser than that.

The Motorola T631, however, compared to the T600, only has an expected range of about 35 miles on paper. However, upon experiencing it myself, there was no obvious difference in performance in terms of range with the previous model – the Motorola T600. The Motorola T631 can reach the same range as the T600 making the range description quite unimportant.

For walkie talkies like this, they both have a frequency range of around 462 – 467 Mhz. Since both units have a power output that does not exceed 2 watts, any individual can use the devices license-free.

Previously, there was a need to get a license even for two-way radios with a maximum of 2 watts power output. However, according to the FCC rules, which were modified last September 28, 2017, everyone can use any two-way radio under the 2-watt range. Isn’t this quite convenient?

And since both models support FRS and GMRS channels, it increases its compatibility with most of the market’s radios. 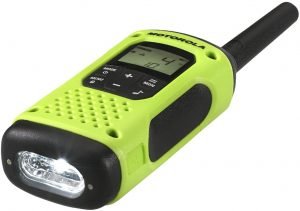 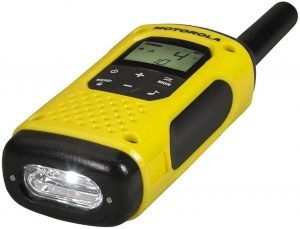 View the Motorola T631 on Amazon*

The Motorola T600 and the T631 are pretty much the same in this aspect. This is probably because of both devices being under the Motorola T6xx line of walkie talkies.

Let’s start with water resistance. Both devices have waterproof ratings as IP67. This means that both will do well even with exposure to water. If you plan on doing outdoor activities where water exposure is inevitable, then both of these models are a good choice for you.

The Motorola T600 and the T631 also has an emergency alert feature where, if used, will emit a loud sound and then followed by a transmission of about 20 seconds. All you need to do to access this feature is press a button, and it will be good to go.

Another handy feature for both models is its VOX function. This is a feature that will allow for hands-free operations. By setting a sensitivity level, the device will automatically detect when you wish to talk and will transmit a signal to all radios on the same channel as you do.

This is a good feature to go along with the walkie talkie’s ability to use earphones. This feature will allow you to place the device in a secure location, making it impossible to lose and, at the same, still be able to communicate without having to press a button. Pretty neat, huh?

The Motorola T600 and the Motorola T631 has 22 channels and 121 privacy codes it can access. They also have weather channels thanks to the NOAA radio receiver support, which allows it to pick up radio alerts on the go. So, if bad weather is coming up your way, you will always be able to know.

Other handy features include the ability to customize call tones, having Auto Squelch to minimize transference, a battery meter, dual battery supports (AA batteries and the in pack rechargeable batteries), a backlit display, and an LED flashlight function to guide you on your way. All of these can be found in both Motorola models.

Given that their similarities outweigh their differences, their prices could be what would seal the deal. The Motorola T600 is priced at around $83.00 on Amazon, and the T631 is priced at $80.00.

This can still be a bit pricey for some, so if you wish to look for other options, please check my other reviews. Some letdowns such as the range is not fully realized, and so on, but if you ask me, the prices are worth it for the features it comes with.

They can fairly hold their own when the need arises and are quite reliable. However, if you ask me,  I think The Motorola T631 wins this aspect as it offers more accessories (carry case included)  in the box while at the same time offering the same features as the Motorola T600.

Overall, both units are outstanding in their respective way. The Talkabout series of Motorola is certainly something everyone should include in their options list. The T631, though, being the later model, is the ideal walkie talkie to buy.

It is surprisingly cheaper than the T600, and just like the Motorola T605, it comes with a carry case where you can place and keep the walkie talkies after use. It can still be a bit pricey, but having an IP67 water-resistant rated unit assures you that you will not face any problems when used near water.

The Motorola T631 also has solid features under its belt making it a good choice for anyone. With its range of channel and set of features, there is certainly nothing you can ask for. If you have the budget and the means to purchase it, I will certainly recommend choosing the Motorola T631 over the Motorola T600.

Tutorial: How to Sync Motorola Walkie Talkies
Motorola MR350R Review
The 5 best Walkie Talkies for Skiing
Baofeng UV-9R vs UV-5R
What does "What’s your 20?" mean?
Does FRS require a License?
What Frequencies do Walkie Talkies use?
Motorola T402 vs T460