First, check if the batteries are charged to full capacity before putting them into the handsets. Turn on the handsets and set them to the channel and frequency that you would like to use. The user’s manual contains a list of channels and frequencies that you can choose from. Set the radios to the same interference elimination code as well. When you are done configuring the devices, you are all set. Press the PTT button and speak into the handset to start communicating with your team, friends, or family members.

The Motorola T460 and the Motorola T465 are both waterproof and weatherproof. They have the same rating on the Ingress Protection (IP) Code: IP54. An IP54 rating means that it is dustproof and splashproof. It can be used even in weather conditions with heavy precipitation, and it will still function well. So, if you need to use these walkie-talkies while it is raining heavily or snowing outside, both of these two-way radio models should work just fine. Just be careful not to plunge either of these walkie-talkies in water. Both radio models can sustain water splashes but not water submersion.

You can use rechargeable batteries or single-use batteries on both the Motorola T460 and the Motorola T465 since they have dual power options. The packages for both these models already include NiMH batteries and two micro-USB wall charging cables for each handset. Because the chargers are micro-USB, these are not as bulky as other chargers. You can even use car chargers to charge the batteries. 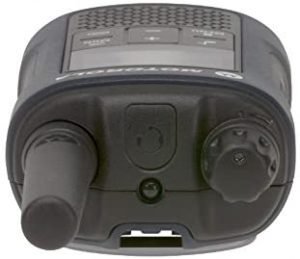 The Motorola T460 and the Motorola T465 both can transmit over 22 channels, each of which has 121 privacy codes. Both models can also be used to transmit over GMRS (General Mobile Radio Service) and FRS (Family Radio Service) channels within the 462 – 467 MHz frequency range. However, take note that you need to secure a license first before using the GMRS channels for your radio communications. This is required by federal law, according to the Federal Communication Commission (FCC). If you are going to transmit over the FRS channels, though, you do not need to

The Motorola T460 and the Motorola T465 have the same features. In fact, I am going to tell you now that they are essentially the same two-way radio.

Both the Motorola T460 and the Motorola T465 have a backlit display, and a built-in LED flashlight, so you will have no problems using this at night. Both their PTT buttons have an option for a power boost to increase range. This will not make a difference, though, if you are only transmitting on license-free FRS channels. So, unless you are transmitting on a GMRS channel, you better skip using the power boost. It will only drain the battery of your walkie-talkie. Both two-way radio models do have battery-saving features. If you are not actively using the walkie-talkies, these will automatically go on time-out mode to minimize battery usage. These will also alert you when you need to charge them or change the batteries.

The Motorola T460 and the Motorola T465 both have auto-squelch and Quiet Talk (QT). These two features are useful for reducing noise during transmissions. They also have the VibraCall feature, which alerts you for incoming calls by vibrating instead of emitting a ring tone. This is particularly useful for hunters to whom silence while pursuing hunting game is crucial. Hunters will also find the iVOX/VOX feature highly useful since this will allow them to operate the walkie-talkies using their voice instead of their hands. This will keep their hands available to handle other things while they are on a hunting trip.

The emergency features of the Motorola T460 and the Motorola T465 includes an emergency alert button. When you press that alert button, it sends out a distress signal and a 22-second-long transmission. This will let your companions know that you require an urgent need for assistance. You can also access the National Oceanic and Atmospheric Administration (NOAA) weather channels using these two walkie-talkie models. Besides that, you receive emergency weather-related alerts such as flash floods, tornadoes, or emergency evacuation announcements.